Durant Lions get taste of winning, hungry for more 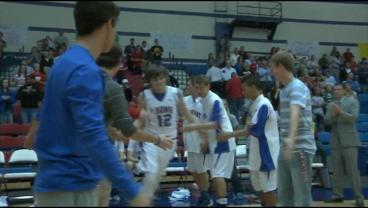 DURANT, OK -- Until this fall, the Lions boys basketball team had not won a game since 2010. Most of this year's squad were members of last season's winless team and their perseverance has them exceeding their own expectations.

Their first win came on their home floor in an overtime thriller against Atoka.

It was the first game of the season and head coach Jason Wilkerson says it felt like a house full of bricks were sitting on top of them waiting for that game, and when they pulled it out the team gained all the confidence they needed.

Now they are 4-3, beating Denison, McAlester and most recently Ardmore.

With the Lions getting a taste of victory, they're primed for a big winter.

"It feels great," senior post Cameron Scheussler added. "Coming into practice last year and still not winning, it's just like something we finally have gotten off our shoulders. Got that win, felt great."

"It's good to see them having some success because they work so hard and I'm glad it's really paying off them," Wilkerson said.

The Lions are off until after Christmas when they'll head up to a holiday festival tournament in Ardmore.