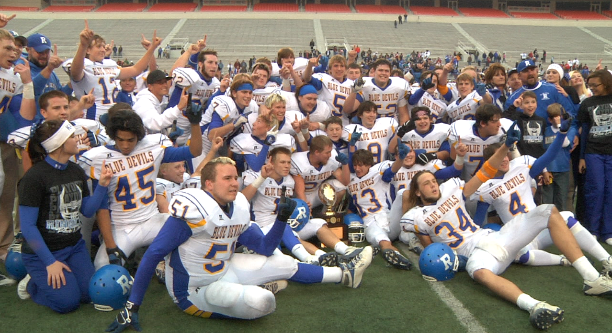 STILLWATER, OK -- The 2012 Class A State Champion Ringling Blue Devils wouldn't have had it any other way.

On a mild Saturday afternoon in Stillwater Tracy Gandy's boys did it. They scaled the Class A mountain, beating the undefeated No. 1 ranked Wynnewood Savages and bringing home the fourth gold ball in school history.

39-12 was the final, after the defense flew to the ball stifling the Wynnewood rushing attack and picking off Savage quarterback Jace Brown three times.

After reeling off 13 straight wins on their way to the title, no one in blue and white had any doubt they'd get it done.

"Coming into this game and I said, 'I ain't going home with that silver ball, and if I do, I'm breaking it,' you know," said senior tight end and linebacker Jackson Dillon. "I don't like silver. So we came and got the gold ball and now it's time to start another chapter and move on. But it was great. Ain't nothing like Oklahoma high school football."

"It was amazing. It feels great, it's great," said junior quarterback Taner Richardson, "I don't know what else to say about it. We went and executed our game plan, our coaches did a great job putting together a game plan for us, we went out and executed and it feels outstanding. I mean, it feels great."

"We pride ourselves on our football program. Our kids take a lot of pride in wearing that blue helmet with a white 'R' and we want to leave the program better off than when we found it, and we were handed a great program and we worked ever day, we don't ever want a black mark by the name of our program and our kids, boy, I know my dad would be proud of them. He'd be really proud of our kids," coach Gandy concluded.