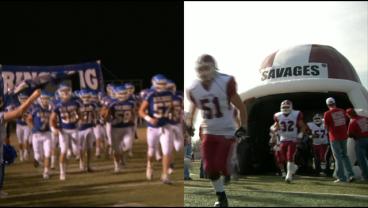 You can't really call it a rivalry yet, because there's not much history between the squads.

They shared a district in 2006 and 2007 with Ringling winning both by an average of 29 points. Their last meaningful game was a state quarterfinal contest in 2003, when Ringling romped Wwynnewood en route to their last gold bal.

This time Wynnewood comes in as the favorite, but don't tell the Blue Devils.

Both teams have a powerful running game and a shut down defense, and when you're talking reputation they're almost identical.

"They've been known for their physical ness," said Wynnewood head Coach Brad O'Steen. "You know, playing very physical, hit you in the mouth, smash mouth football and that's kind of what we do here. You know, we've been getting after people up front and very similar in styles."

The keys for both teams are echoed: stop the run. Wynnewood has the tough test of stopping Dillon, the Memphis commitment, while Ringling will have to stop Trey Knowles.

Neither are easy tasks.

"They have a good tight end. He can run pretty well and they put him at running back and he seems like he's pretty good, which we will finally see Saturday," Knowles said about Dillon.

"Can we tackle him?" Ringling head coach Tracy Gandy wonders. "We have not seen a running back like him and thank goodness there's not many of them out there"

It's desire that will decide which town it comes home to.

"Who wants it more. I think that's what it will come down to. Both teams are capable of beating each other, but I think it just comes down to who wants it more," Dillon concluded.

The Class A State Championship will kick at 1 p.m. from Boone Pickens Stadium.