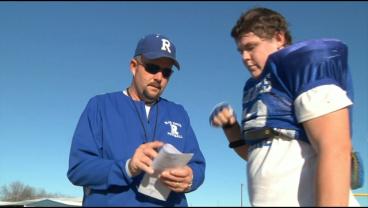 RINGLING, OK -- Rick Gandy is an Oklahoma football legend. The former Ringling coach led the team to 242 victories, two state championships and only missed the playoffs twice in his 28 years at the helm.

The torch has been passed to his son Tracy, who's been carrying it since 2008, and Saturday he can add to the Gandy legacy.

It is the golden age of Ringling football and has been for some time. Nine years ago the team hoisted it's third gold ball, second under Tracy's father Rick.

Believe it or not, at first Rick wasn't too thrilled with Tracy's dream of being a coach.

"Actually, my dad didn't want me to be a football coach period. He convinced me, he had a way of doing that convincing me, and made me think that it was my idea that I wanted to be an ag teacher," he said.

The Ringling native and member of the 1989 state championship team, grew up idolizing his dad's Blue Devils. But he fulfilled his father's wish and headed to Oklahoma State University to become an ag teacher.

He quickly realized he was destined for something else.

"It's nothing against ag, I love ag, I really enjoyed my time while I was in student teaching, but I knew I wanted to coach football."

So, Tracy went back to school, got enough credits to coach and eventually was hired at Ringling. That is when his dad finally came to terms with him being an assistant coach.

They'd win a state championship together in 2003, but then in 2005 a horse riding accident left Rick paralyzed and Tracy was there to fill his shoes.

"And then once he got paralyzed and Mr. Shivers, the superintendent at the time, he asked me to step in and fill in for dad and it was at that time dad was OK with me being a head coach."

Rick wanted him to be the head coach, but Tracy says he wouldn't take the title. Instead he insisted on being the interim head coach winning his dad 30 some more games in three years before he passed away in 2008.

Tracy says he lost his best friend the day Rick died and knows why he was reluctant to let him coach.

"He had a lot of success here. He's a Hall of Fame coach, he won 250 ball games and didn't lose very many, he was in the State Finals five or six times, and I understand his concern about following in his foot steps and how I will forever be judged by him, and I'm OK with that."

Tracy adds his dad taught him to surround himself with good people and to work his tail off.

He apparently has listened.

He, alongside his brother Richie and other best friends on his staff have led this year's squad one win away from doing what he wants to do most, add to his father's legacy.

"We inherited a great program from my dad. I thank God everyday for the opportunity to be a part of a program like this."

Ringling will kick against Wynnewood in the Class A Final Saturday at 1 p.m.