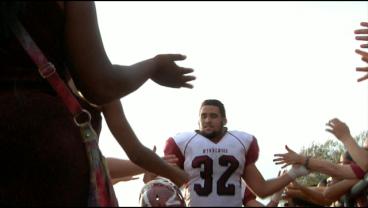 WYNNEWOOD, OK -- Wynnewood head coach Brad O'Steen says his Savage squad is similar to Ringling in their physicality. Both sides are smash mouth, no nonsense teams and Wynnewood has the perfect person to lead that front.

Meet Trey Knowles aka the "Knowles-dozer," a 6-foot 210-lb full back and linebacker who has run all over Class A this season averaging 140 yards a contest and almost nine yards a carry

His hard work on and off the field has earned the respect of all his teammates.

"It feels good that everyone kind of looks up to you and towards you to help lead the team and they look up to you for support and if they ever need you they come to you," the senior said.

It's Wynnewood's game to run it up your gut, and Knowles is typically the guy to do it, but his stats would be no where near without the help of the front five.

The impact the run game has on the offense is staggering. When Knowles follows his reliable offensive line time and time again, it makes life easy for senior quarterback Jace Brown.

"When you run and run and run some more, the safeties start to cheat down a little bit, trying to start the run and you just hit them over the top," Brown said.

Hit them over the top is exactly what Brown has done all season. Take for example last Saturday, Brown was efficient tossing two touchdowns on passes of 85 yards and 30 to put his team in a position to win.

Now there's just 48 minutes left in an undefeated season for Knowles and Brown, they know they have to continue their production to leave Stillwater champions.

"You just have to stay focused before every game and don't worry about all the other hype outside, just stay focused on the task at hand," Knowles concluded

"Being able to walk talk throughout the rest of my life now, since I'm a senior, this is my last year. Go out big, and that's the biggest thing is going out big and winning," Brown said.