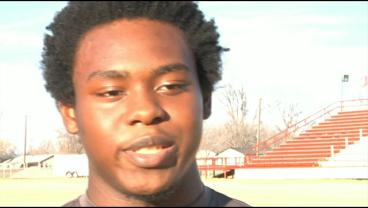 DAVIS, OK --- Deaundre` Carr has helped lead the Davis Wolves to the State Championship. He is the team's leading rusher, averaging 12.6 yards per carry. And he's done it all without his number one fan cheering from the stands.

"Its been hard for me this whole season. But we're a family. Whenever somebody is down we try to lift each other up and that's what they've been doing all year and I'm glad," Carr said.

Carr's mother has Multiple Sclerosis and has recently been hospitalized. Carr has been able to use the thought of his mother as motivation to help him get through this season.

Football has helped make his situation a little easier.

"The team maybe gives a little bit of a distraction for two or three hours a day, getting to come down here and prepare. But football is way less important than a lot things going on in life and that's certainly one of them," Head Coach Jody Weber said.

"We all grew up together. We all know Deaundre's mom. We try to lift him up and keep him in good spirits. He's always going to have it in the back of his mind...but try to keep him focused on happier thoughts," Carr's teammate Hunter Beesley said.

Carr and his teammates are now focused on the State Championship. Unfortunately his mother will not be able to attend the game but she will be proudly watching from afar.

The Davis Wolves will take on Oklahoma Christian School in the 2A State Championship, Saturday in Stillwater.