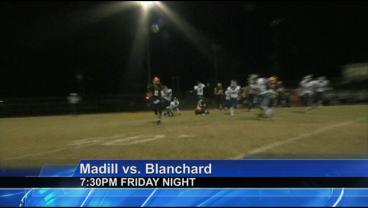 MADILL, OK -- The undefeated Madill Wildcats have never won a state championship in football but with they way they've been playing, this could be the year.

Last week they'd head to the locker room at half down 6-0. That's when they rallied, realizing it's never over and were forced to overcome the adversity.

They answered the call scoring 27 second half points and advancing.

Now they'll have to play Banchard, a team that likes to spread it out with a receiving corp and quarterback head coach Milton Cooper says will be the best they've faced all season.

"Staying focused, and covering the pass. They have three receivers that they mainly throw to. And on offense we just have to run the ball, and throw and catch," said starting quarterback Paten Bond.

"Our coaches have done an outstanding job in getting our players in the right positions to be successful. We had good meetings this week, a good practice today and I'm really confident that they'll carry on with the mission," Cooper added.