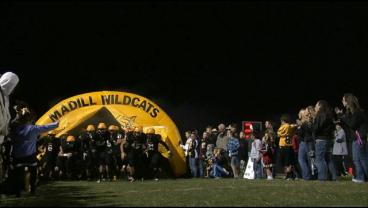 That's exactly what they did last Friday when they welcomed Star-Spencer to town.

They didn't have the start they wanted, quickly going down 6-0, but the leaders stepped up and now the Wildcats find themselves one round closer to a gold ball.

"Star-Spencer was a very talented football team. They had size, speed. They did some things that we haven't seen in them in recent weeks," said Cooper. "They lined up in man coverage against us. They kept everybody in the box. They played us very well. I was really proud of our kids coming back from adversity, being down six at halftime. Coming back in the second half and scoring 27 points, that's pretty good."

It won't get any easier for the Wildcats as they'll host a tough Blanchard squad Friday night at 7:30.