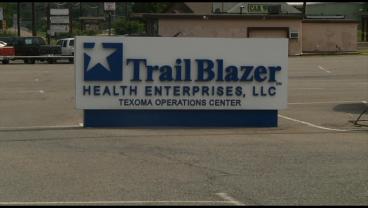 DENISON, TX - A company with a long standing history in Denison may be forced to close their doors by this fall.

Almost 500 workers at Trailblazer Health Enterprise were told today they may be without a job by this fall, that is, if the company isn't able to secure some new business very soon.

"Trailblazer is working extremely hard to bring in some other business that would take the place of the medicare contract." said company spokesman, Billy Quarles.

Quarles says last November the company lost a major federal medicare contract that about 90 percent of their employees were dedicated to working.

Today they had to inform all employees at their Dallas and Denison branches that cuts are coming, unless they find new business soon.

The first cuts are scheduled for October 26th and the second cuts are set for November 16th.

"We are doing and will do everything we can to assist the employees that are impacted there, our employees, they're the reason that Trailblazer Health Enterprises has been so successful for years and years with the medicare programs." said Quarles.

Today we talked with a few of the employees, some who have worked there more than 30 years.

They didn't want to talk on camera, but said they knew today was coming, since they lost that contract in November.

Getting the letter made it a reality and made it a very sad day for everyone at Trailblazer.