Charges made in murder of Velma teen - KTEN.com - Texoma news, weather and sports

Charges made in murder of Velma teen 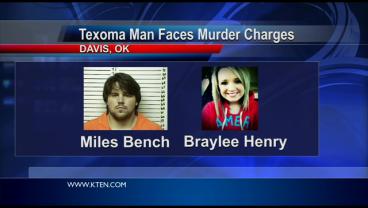 The man accused of her murder is twenty-one year old Miles Bench, originally from Davis. Officials say he has been in police custody since being arrested last Thursday driving Henry's car. Authorities state they tracked the vehicle using OnStar GPS near Weatherford, Oklahoma in Custer County where the arrest was made.

Henry's body was found near County Line east of Velma early Thursday morning according to Stephens County Sheriff Wayne McKinney. The sheriff says the girl went missing Wednesday night after stopping into the Tee Pee Totem Convenience Store in Velma. The police were called when other customers found no employees and blood on the floor.