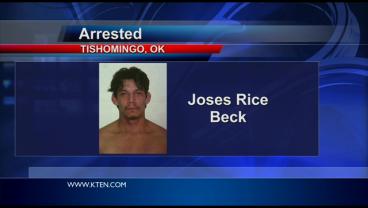 TISHOMINGO, OK -- Tishomingo police were busy Monday evening trying to track down a man on the run.  Police chief Shannon smith tell us Joses Rice Beck reportedly shoplifted from two different stores in town then ran into a nearby wooded area.  He later showed up at a house.  The residents say Beck pulled a knife and refused to leave. They called police but he took off into the woods again. Emergency management then notified other law enforcement and the community through their mass notification system that an armed, intoxicated man was on the loose. Other agencies joined in on the hunt, but it was a Tishomingo officer who found him at 6th and Maytubby. Beck was arrested and booked into the Johnston County jail for public intoxication and two counts of shoplifting.  Other charges are still pending.