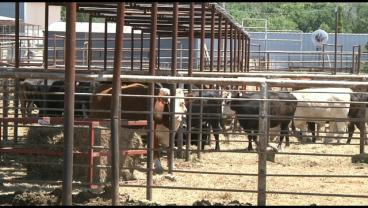 TEXOMA -- The drought of 2011 was one of the worst in Texoma history by drying up pastures and forcing ranchers to sell their herds.

Now, with low cattle numbers across the area, ranchers are paying a premium at the sale to restock their herds.

Cattle prices have hit record highs in recent months after a severe drought forced ranchers to sell off and slaughter their herds. The rain has returned and many ranchers in the Texoma area want to restock what they lost over the Summer. This is expected to increase the price of already scarce cattle.

"This time of the year... after we had such a severe drought last year, throughout Texas and Oklahoma, a lot of the cow numbers have disappeared... And a lot of people have sold out.", Ronald Jordan, Durant Stockyards

The problem that cattle ranchers are finding when they come to the sale is that the cattle numbers simply are not available because of the exceptional drought over 2011.

Just in the past year alone, Texas and Oklahoma sold nearly one million head of cattle.

"There were 600,000 head of cattle sold in Texas in 2011 and about 400,000 head of cows sold in 2011 in Oklahoma. With cattle numbers dropping as quickly as they did in such a short period of time...   The rules of supply and demand take place...   In this case doubling the price at the sale in just a few months...a lot of these bulls for instance last month brought sixty something cents per pound are now bringing a dollar twenty"

With low numbers, slaughterhouses are competing with breeders for the same cattle which could drive prices up even higher.

"Demand is good, exports are great, therefore all of these packers are running short and they need the product very bad, and that's why it drove the market up on these slaughter cattle."

Officials say cattle inventories are as low as they've been since 1952 and say not to expect those numbers to come up soon. It could take 3 to 5 years to rebuild herds to the numbers before the drought.