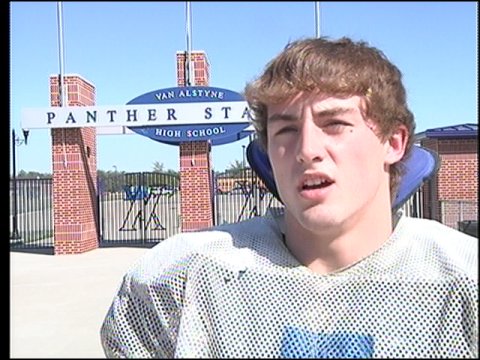 VAN ALSTYNE, TX -- This is Jordan Barnes running for more than 500 yards and juking out both the Farmersville defense and Van Alstyne film crew. After all was said and done last Friday, his 522 yards on 34 carries became the fourth highest single game rushing total in the history of Texas high school football. Even though he led his Panthers to a 62-55 victory, he couldn't take all the credit. In fact, he thinks some of his other teammates were the most important players in the game.

"I'd say the five up front, my offensive line, because they did amazing.  Holes were there.  I just had to run," Barnes said.

Head Coach Mikeal Miller says that's just the kind of person he is.

"He's a very humble young man, very respectful.  One of our biggest leaders, I mean, I could go on and on.  He's just a good young man," Miller described.

When looking back on the game, Barnes knew he was in the middle of an incredible personal performance, but that wasn't his ultimate goal.

Barnes will be the first person to tell you that it's not about individual performances, it's about the team behind you.