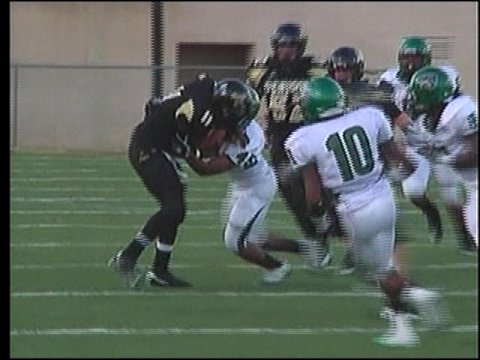 After going just 2-8 last season, one word that comes to mind for the Denison Yellow Jackets is "redemption." The Yellow Jackets have been hard at work this offseason and they're eager to see all of that hard work pay off. The players and coaches understand the importance of getting off to a good start and they hope to do so when they kick off the season Friday night against Kennedale in Wildcat territory.

"I think it'll be better because we're trying to go out and get a win and beat them at their own place like they did to us last year," left tackle Chastin Smith added.

Although the Yellow Jackets are confident in the improvements they've made this offseason, the last thing they are going to do is take the Kennedale Wildcats lightly.  Denison Head Coach Cody White talked about the challenge that lies ahead.

"They've had a lot of success.  A lot like our place in the recent past, or long past.  Very physical team, difficult to prepare for.  They're a wing-t which is tough defensively, you know we don't see it anymore so we got a challenge in front of us," White explained.

Although the Yellow Jackets start the season on the road against a unique Kennedale offense.  It's still clear that they have high expectations for starting this season off on a winning note.