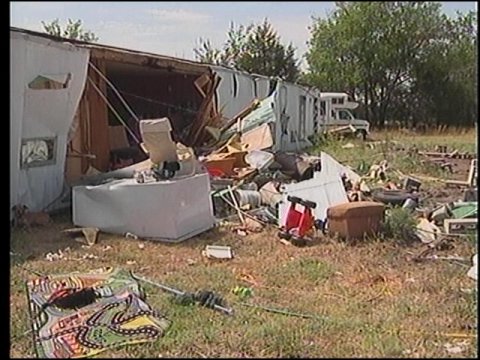 ALLEN, OK -- One family had quite the scare early Wednesday morning. Storms flipped over their mobile home while they were inside.

Wednesday morning at 4:00A strong winds blew through Allen, OK. Emergency Management officials say some indications point to a micro burst and they believe straight line winds caused the damage.

One mobile home was flipped over with a family inside. They were taken to the hospital, treated and released with no major injuries, but it's a night they won't forget "They're on the corner of the house. Me and my two year old were trapped under a mattress. We were about two feet off the ground. Something like that. And it was being held up by the night stand. And we couldn't find our three month old. And luckily we found her under the mattress with us. Which was just a God thing.", Jamie Manuel. Power was knocked out in the area, but was completely restored around noon on Wednesday.