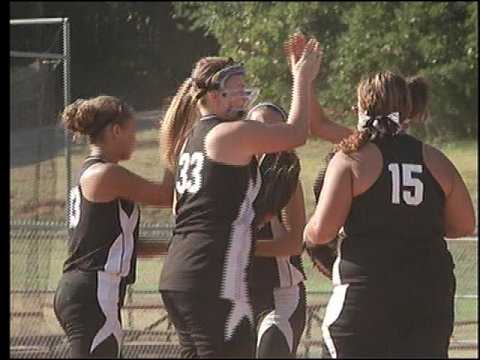 DENISON, TX -- The Denison Dixie Belles softball team is headed to the World Series on Thursday.  This group of 13-15 year old girls blew past the competition to claim the state title undefeated, just over a week ago.  Denison will now represent Texas at the USSSA's Dixie World Series and the girls aren't nervous.  Most of the team has played together since they were seven under the direction of Coach Jackie Murrell.  And the Denison squad thinks that will be to their advantage.

"We don't coach with intimidation; we coach with love.  And it shows.  All we do is just ask them to go get it," Murrell explains.

"We've all be under pressure before.  Games here," Denison player Hailey Jackson says, "that was a lot of pressure, but when we get down there we're just going to play as a team."

The Denison Dixie Belles will open up the World Series against Alabama on Saturday at 2:00.  You can watch that game live at www.jockjive.com.