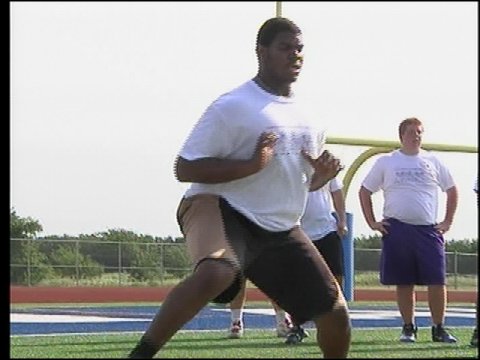 VAN ALSTYNE, TX -- Many specialized football camps during the summer are geared towards the skilled positions: quarterbacks, running backs, and wide receivers.  But today, in Van Alstyne, the focus was the offensive line.

Former TCU Assistant O-line Coach Tony Johnson hosted a non-pad, fundamentals workshop.  Over 60 athletes, beginning at age 9, came out to learn the steps it takes to become a next level lineman. Although, Johnson says an Offensive Lineman is the most under-coached position in football.

"Youth football, especially, you see the youth coaches generally take the little guys and send them to the end of the field and the heavy guys they consider non-athletic and all they do is push dummies all day and don't really get to anything with the football," Johnson says, "I got tired of watching that when I had my own kids growing up so I decided that somebody needs to put together a football camp for little guys that play offensive line."

Johnson gets help from former TCU coaches and players as well as coaches from around the area to run the one day camp.