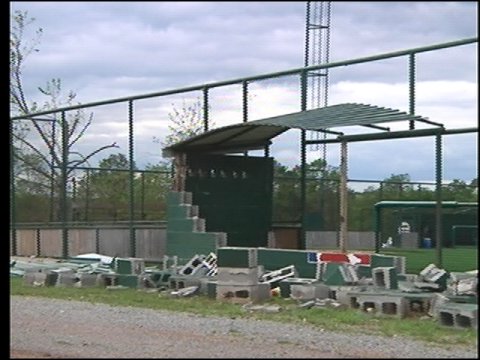 As the small town of Tushka, Oklahoma picked up from a deadly tornado, their baseball team knew they had to finish out their season for their community. And it's only made them stronger. Tatum Everett has the story.

April 14th. The Tushka baseball team was on the road playing Hugo when a tornado barreled through their town and destroyed their school.

"Well, the school looked like someone had set off a couple of bombs.  There was nothing there," senior outfielder Remington Evans said.

"I was pretty down. It was just totally messed up, destruction everywhere," describes senior shortstop Jordan Mobbs.

The Tigers finished the rest of the season on the road and even though they earned home field advantage in the playoffs, they will have to play that one away, too.

The team decided if they can't play on their field, they'll take a piece of it with them. They've dug up home plate and put it in their bus that they take to practices and their upcoming playoff game.

"It's a panic, that these kids have. And they're a little lost. They don't have their school," said Head Coach Dwayne Dale said.

But they're not missing the drive to want to bring home the state championship.

Evans says, "We have so many things to play for. We have our community to play for, to take their minds off their homes, lost ones."

And what's become most important is the community and each other.

"I wouldn't rather go anywhere else. When you accomplish something, have more people look at you and say hmm, never thought that would happen," Evans reflects.

Tushka faces Quentin in the district tournament Friday at Calera at noon and 2.