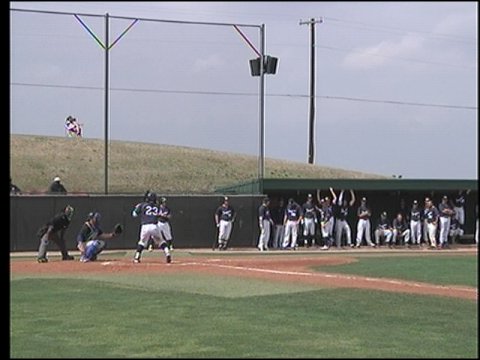 DENISON, TX -- The Grayson County baseball team is one of the best in the country, sitting at number 2. But they have a big obstacle this week. Tatum Everett takes a look at that match-up.

It's been two years since the Grayson County baseball team brought home the National Championship title, and Head Coach Dusty Hart is ready to do it again.

"It'd mean a lot. I mean that's the goal for this program every year," Hart explains.

And they are well on their way to the regional tournament. But the Vikings face a true test this week: McLennan Community, the top team in the conference standings.

"They're going to be the same kind of team that we are. They got a lot of talent. They don't walk guys," Hart says, "It's going to come down to who makes the least amount of mistakes."

A win could mean a boost in the rankings, but the Vikings are just taking it one game at a time.

"There's always going to be pressure in every game to win them all. They're all important no matter what," says Grayson Catcher Abel Baker.  Grayson Third Baseman Madison Carter adds, "We don't need to put any added pressure or anything like that on us. We just need to come out there and play and compete like we have been."

And Coach Hart believes there will be a lesson to be learned win or loose.

"Hopefully, we can come out on top this week. But in the long run, guys kind of know that once you get to the tournament, anybody can win that thing. We'd love to have momentum going into that deal, but you can look at it either way. I mean, if they do beat us, maybe we'll be good and motivated," surmises Hart.

Motivated enough to bring home the national title back home to Grayson again. Grayson returns home on Friday for a double header, also against McLennan.