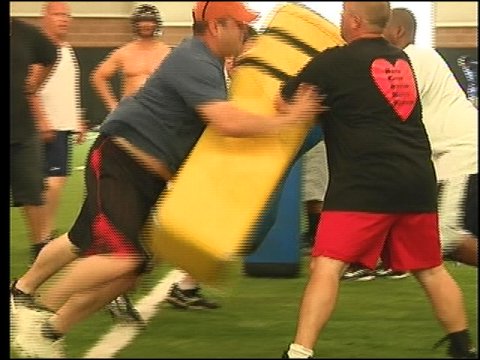 DENISON, TX -- When football players hang up their cleats, they always dream of playing one more game.  Now old players are getting their shot in full contact action.  Here's Tatum Everett with more on the Denison versus Sherman alumni game.

Sherman versus Denison.  A rivalry that gets in your blood and stays there.

"There's no way to explain it. I mean, it's just like waking up in the morning. It just is. Sherman Denison rivalry. I don't care if you're pee wee on up to this. But when it comes to competing in sports, there's nothing like it," Sherman Team Captain Kevin Andrews explains.

And when news broke of an alumni football game, it was a no-brainer for many former athletes.

"I told the guy who's putting it on, I said I don't think you understand the rivalry of Sherman and Denison. It's nothing compared to the other teams he was telling us about," said Denison Team Captain Jason Pettit.

Andrews added, "To get a chance to play against Denison again? How could I say no?"

Now, these guys don't want you to think this is going to be grandpa's game. They're suiting up in pads and helmets and it's tackle football.

"We didn't like to loose back in high school. Do you think we've accepted it now? It's a competition," stated Andrews

Pettit said, "That sounds like a great opportunity to get a bunch of guys back in pads and showing them what it's like to hit again."

"It's not just like a walk in the park. Like we're going to approach it like it's practice. We're going to be serious. Dead serious," confirmed Andrews.

And of course, like with any true rivals, the trash-talking has begun.

"I mean, it's two cross-town rivals. You know, there's banners up all over town. I'm hoping to have a big turnout. It's fun to play. It's even more fun to play for your town.  You know, if we can get all the Sherman fans there and all the Denison fans there, it'll be great," encourages Pettit.

And the big game is set for Saturday at 6:30 in Munson Stadium. Howe versus Bells kicks off the event with a contest at 5.  Tickets are 8 dollars at the gate and kids 10 and under are free.