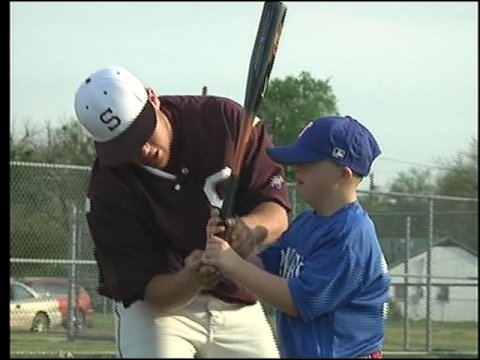 SHERMAN, TX -- We're going to start with a special story tonight, introducing you to an inspirational baseball league where every kid hits a home run and every child is a winner.

Andrew Bentley has been playing baseball for 12 years.

"There was one time, I just went from third base, but I thought it was first an then just came home. And I was just so excited and I'm like I'm doing this forever," Bentley explained.

Andrew is a member of Audra's All-Stars. A league that gives kids who may not be able to play on their school's sports teams a chance to participate in America's favorite pastime.

"It's at his pace and he gets to be involved. He's not left out. He's not sitting on the bench," said Andrew's mother Jennie Rolen.

Director of the league Paul Martin knew this could grow into something special for families. He was the one who encouraged Elsie Russell and her son, Clay to join.

"I said why do you do this. And he said because you deserve to sit in the stands just like any other parent out there in the whole wide world. The first game that we went to; Clay got to hit that home run and jumped into Paul's arms as he came across home plate and it was like now I know why he does it. I just burst into tears and it was a wonderful feeling," Russell remembers.

Martin, sponsors, and the volunteer buddies all work together to make this childhood dream a reality.

"Chevy Youth Baseball has done a great sponsorship and we're happy to be part of it," says Ramey Chevrolet's Darrel Ramey, "The league gets a whole bunch of shirts and they get a whole lot of equipment."

And all of that support gives these children memories to last a lifetime.

According to Russell, "We get to enjoy it as a family. We don't get to do too much like that, you know where are kids are welcomed. And they're welcomed here."