"Happy Hour" Could Soon Be Legal in Oklahoma 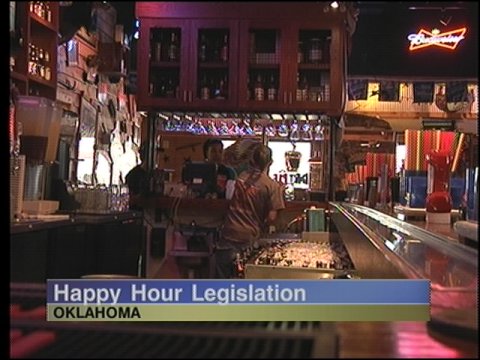 OKLAHOMA- Did you know, it's against the law in Oklahoma to serve discounted drinks during a "Happy Hour". But some restaurants are using the vague language of the law, to get around it.     And new legislation could clear up the confusion, making it much easier for restaurants and bars to have happy hours. Meredith Saldana has more on this story.

The Oklahoma ABLE Commission says, in discounted prices on hard liquor, strong beer and wine are not allowed to be offered during specific hours.

For example, mixed drink specials from 4 pm- 7 pm, on a Tuesday, but that could soon change.

As it stands, the only way a happy hour can be offered is if the special runs from Sunday thru Saturday at the business.

They serve drinks at a reduced rate during the week, they just call it "Cattle Call" instead of "happy hour" and he says it's been great for business.

"To be honest with you, after we started our Cattle Call there's a lot of other businesses, including some of the bars, that have started happy hour or their equivalent to our cattle call," says Bryant. "So I don't know if it's to compete with us or kind of get in on the fun."

He also said Oklahoma spends hundreds of millions of dollars each year on alcohol related deaths and injuries.

We'll continue to follow the bills fate and keep you updated with the very latest.