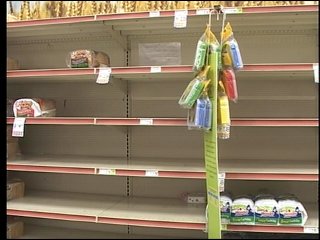 ARDMORE, OK--Monday night it seems everyone hit the grocery stores to stock up on food and supplies. In Ardmore, one grocery store was so busy they actually ran out of some items on Tuesday. Meredith Saldana has more on this story.

The Homeland Store in Ardmore had what Store Manager Brad Carder called a good problem to have.

Carder said the madness started about 10 a.m. Monday morning as people we're stocking up on those winter items.

Homeland was able to stock most of the shelves for today, which was a good thing, considering on Tuesday the store saw a good amount of business.

"I don't think the cold weather and the snow and ice have hindered [our customers] too much. I think if they need food and necessities they're going to get out," he said.

Carder expects business to be pretty steady on Wednesday.

With temperatures expected to be low, Carder says soups and stews will be the hot items.

As for their stock of bread, much of it comes from Oklahoma City, so the trucks will not be coming to our area until road conditions clear up.