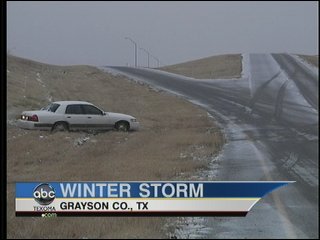 TEXOMA--The white stuff has been falling out of the sky since early Sunday morning, not stopping until 4:00 PM that day.  It may only be a couple of inches, but it has meant several of cars on the side of the road.

Nearly a dozen TXDOT workers have been clearing the highways today. They're all over Grayson County, just a few of the roads include US Highway 75, 82, FM 120, US 377 and US 69. They're using salt and sand to make sure drivers can get to their destination.

"They need to slow down. The roadways may appear to be clear and dry but once they get to the bridges that's when the ice will first start forming . So, anytime you get to the bridges you need to slow down," David Selman said, TXDOT area engineer. "If you get into an icy situation one of the things they don't need to do is slam on the breaks. They just need to let go of the accelerator and try to control it."

Road workers are also clearing out Highway 91 and 289.

Selmen says than when temperatures drop below freezing, roads and bridges can become slippery situations.

If you're driving a vehicle that does lose traction, safety workers advise to not break and let off of the accelerator.

TXDOT workers say they're going to be out all night Sunday clearing the roads well into Monday morning.