Citizens Want to Use Off-Road Vehicles by Lake, Corps Concerned 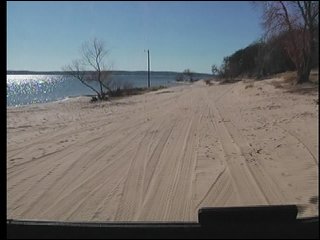 ENOS, OK--Lake Texoma residents say they're getting tickets---that is for driving their golf carts, utility vehicles and ATVs near the lake. The US Army Corps of Engineers wants to stop some of the traffic, but some locals say its the only way they can see the water.

Charlie Boudreaux owns several off-road vehicles. He said it's the only way for him and most of his neighbors to get to the lake, but lately it has become an issue.

"They can't launch their boats down here, then they have to drive--they have to take the same trip that you and I just took," Boudreaux said.

The Corps of Engineers held an open forum Saturday to discuss the problem---what vehicles can be driven to the lake and where. They're concerned about public safety and shoreline erosion.

"How you operate those vehicles in some areas--it's not necessarily--it may or may not be safe for them to be operating a golf cart or an ATV or something like that," Kent Dunlap said, US Army Corps of Engineers Natural Resources and Recreation representative.

"They tell you ecological reasons--you know--or conservation," Boudreaux said. "Preserving the shoreline and stuff like that. I don't know if that is really the issue."

Lake residents say it's not just the UTVs and ATVs that's causing it. It's actually the fluctuating water levels, rain, and other environmental factors. Just three years ago, Boudreaux said the water almost reached the county roads.

One Marshall County Commissioner is trying to balance corps regulation with what property owners say they're entitled to.

Boudreaux just wants a convenient way to access the lake near his home.

"If they would establish a designated parking area close enough to the water where it's not a 100 yard journey to carry all of your stuff down here, that's reasonable," Boudreaux said.

To satisfy residents and protect the lake, the corps hopes to have some guidelines in place by this spring.

One possibility suggested by the Corps of Engineers and citizens is to add more access points for the unlicensed vehicles.