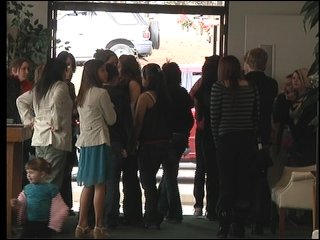 ARDMORE, OK-- It's nothing new to you, Texomans and their generosity. Donations helped an Ardmore family pay for a funeral for their teen. Meredith Saldana has more on this story.

The cause of death is still being investigated but all of the unanswered questions were put aside, Friday, for her funeral.

It was an emotional service  as friends and family gathered to pay their respects to Samantha .

Family member Jerry Denham says, "I have a granddaughter that almost looks a lot like her, just turned 12, and I'm just going to miss her and the companionship that they're going to be missing cause they enjoyed being with her."

It was a sad day but Samantha's grandfather, who has raised her since she was 3, says it was also a day of thanks.

He says the funeral wouldn't have been possible without the generous donations by Texomans.

"The community is- the pouring of love and helping from the community is just wonderful and we thank everybody for helping make an unbearable time bearable and what a community we have. We have a wonderful community."

Family members say they're not surprised by the community's generosity.

"No, Ardmore always does that," says Denham.

Ozment adds, "Everybody's helped so much and I just appreciate it so much thank you."

The investigation is ongoing.