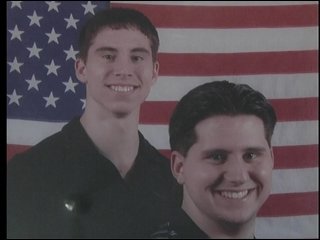 BELLS, TX--It's not something that a healthy, 20-year-old college football player would expect--cancer. His disease has only affected 200 people worldwide, but his fight could lead to hope for others in the future.

Brothers Matt and Nathan Romig wore the same number, 75, when they played football for Bells High School. Instead of passing down a jersey, Nathan is now giving Matt his stem cells. His little brother has cancer.

"Leukemia never entered our minds," Sue Romig said, Matt's mother. "It was like a bomb went off."

Matt Romig was diagnosed with a rare form of leukemia last November. It forced the Texas A&M Kingsville college football player to take a break from the field.

"It was like our world ended," Sue Romig said.

"I was so surprised," Adams said. "I wouldn't expect him to get cancer in the first place."

Doctors are optimistic though. Medical professionals at MD Anderson say that his success in the hospital could help them find a cure.

"Matthew has already surpassed everyone's expectations," Sue Romig said. "No one with this type of leukemia has sent into remission this quickly.

His mother hopes that within a year, Romig's life will go back to normal.

"He had cancer before they even knew what kind it was," Sue Romig said. "Matt is a very positive person. You will not meet anyone more focused and more positive than Matthew. Whatever it is, he's gonna be, he doesn't give and he's a fighter."

The Romig brothers may be passing more than just a jersey down years from now, they may also be the hope for someone else fighting the disease.