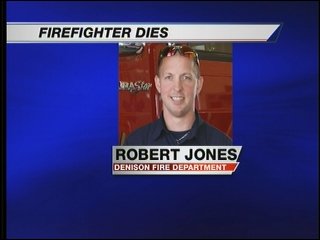 The flag at the central fire station was at half staff in honor of Robert Jones of Bonham. He was just 27 years old. Firefighters say he was a father of three. He had been with the Denison Fire Department for the last two years.

The funeral is set for two o'clock Sunday at the Baptist Church at 7th and Main in Bohnam.