Two Arrested for Walking on Street Instead of Sidewalk - KTEN.com - Texoma news, weather and sports

Two Arrested for Walking on Street Instead of Sidewalk 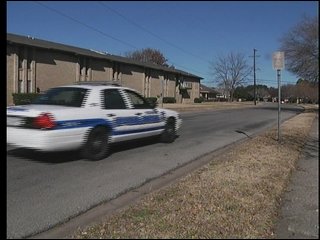 SHERMAN, TX--Just after midnight Wednesday a man was walking down the street, but it wasn't your typical stroll he was stopped by police and given a ticket.

"You know, there's a chance if there's sidewalks and you're walking down the middle of the road you can be stopped," said Sherman Police Sgt. Bruce Dawsey.

Walking down the street instead of the sidewalk could mean a $173 fine and a night in jail. Sherman police say they're upholding Texas traffic code making sure that pedestrians aren't in the way of oncoming traffic.

"I really can't believe that because this is something new to me, that made me feel like if anybody walked down the street just going to the store you know and getting arrested and you didn't do anything--that's not right," Arneitta Blanton said, neighbor.

Sherry Killion says getting stopped while walking down the street is not something she'd expect.

One woman was seen on the 700 block of S Willow Street stopping motorists and asking for money, but because there's no city ordinance against panhandling she was charged with walking down the street where sidewalk is provided.

Sherman police say they're doing it for the public's safety, and if you are stopped, there's a few options.

"He can either issue a citation, he can give you a warning or he can issue you a citation and then put you in the Grayson County Jail on that citation," Dawsey said.

"I don't think that's right unless you were doing something wrong to get arrested," Blanton said .

According to Texas Traffic Code, it's Class C Misdemeanor and police are enforcing it for the public's safety.

If there's no sidewalk walking on the side of the street facing oncoming traffic is legal.