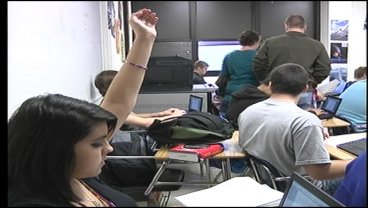 DENISON, TX --  A $79 million school bond could be on the may ballot for Denison residents. The money would go towards a new high school and renovations to several other campuses. Deeda Payton has the details.

The superintendent says interest rates for school bonds are low, construction costs are down about 20% and the school district hasn't held a bond election in fourteen years, so he believes now is the right time.

Ask any teacher and they'll tell you, getting teenagers to pay attention in the classroom is hard work. But, when their friends are mere inches away from them in crowded classrooms, the task becomes even more difficult. "There's some classrooms that are really cramped like in the beginning of the year my speech class, we had to move classes because we had too many kids in our class and it was really cramped," said student, Karyssa Lott.

That's just one reason why administrators at Denison ISD are asking that a $79 million dollar school bond be put on the ballot. They believe it's time to build a new high school. "The enrollment is 350-400 students more than this building was built for," said Principal Cavin Boettger.

Denison High School was built in the early 1950s for about 900 students, but 1300 are currently enrolled. The principal says they are currently using every square inch of space in the building as well as portable buildings behind the school to accommodate students. "We've had to move portables in to handle some of the overflow. We've also had to finagle and double up on room assignments. We've had teachers losing their room during a conference period for another teacher to teach there," said English Teacher, Louis Chandler.

"We don't have enough electric to plug into, just the infrastructure of the building can't stand up to the demands that it has now," said Boettger.

If the bond issue is placed on the may ballot, it will be the first time in fourteen years that Denison ISD has asked voters for money, and the superintendent says now is the time. "The interest rates are very low for school bonds, building costs are about 20% below what they were three years ago so the time is perfect as far as the cost of doing this project," said Dr. Scott.

If approved, it will cost taxpayers 19 and a half cents per one hundred dollar property tax.

The school board will make a decision in the next couple weeks on whether to place it on the ballot. If approved, construction could start as early as next fall on a new high school at highway 75 and 91.