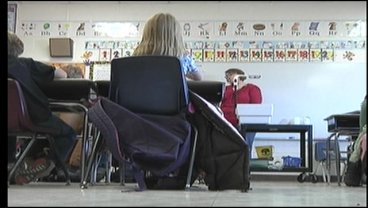 OKLAHOMA-- Money for Oklahoma schools remains tight, meaning lawmakers are looking at numerous ways to save some green. Now, one representative wants to combine small school districts. Meredith Saldana has more on this story.

Superintendents at small schools say the idea won't save that much money and actually would do more harm than good.

Oklahoma representatives begin this legislative session with a big question.

How do you fund education, while facing a huge budget deficit?

At least one representative says the state can save money by combining school districts with 500 students or less.

Representative David Dank of Oklahoma City says, "What we're doing is trying to get as much money into the classrooms to educate youngsters and cut back on bureaucracy within the system."

"The more money we can put into the classroom, the higher teachers pay, with giving them the right tools to be able to teach with. The right books, the right computer systems and all that, the better off we're going to be," says Representative Dank.

"I think once they get to the point where they start looking at the bills and start doing some serious investigation into it, they may find out that while it may sound good on paper, the reality and the logistics of it might be completely different," says Stinson.

He believes small schools have an unmatched personal connection with their students, something that could be lost with redistricting.

"I believe all of those things, people in Oklahoma City and Tulsa can't relate to and therefore its not in their equation when they start looking at these types of things," says Stinson. "Yeah, we're totally against it."

Representative Dank says he feels his proposal is modest and adds that he does not support combining students into one school.

He hopes to have the bill ready by the end of next month.

If passed, the number of Oklahoma school districts would drop by nearly 200.