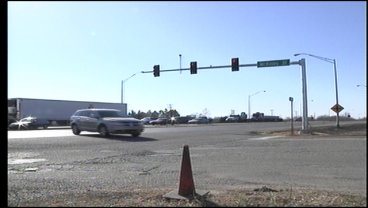 Time lapse video shows just how many cars and trucks go through Calera on a daily basis.  So many in fact, the number of deadly crashes on this stretch of highway is higher than most other highways in Texoma.  "Oh, we were just thinking the other night how many have been killed right down here on this highway.  Thank the Lord for these lights that they're putting in today," said resident Melba Anderson.  Melba and Norma Short have watched too many people die on this highway that runs through their small town.  Melba added, "Not only was Norma and them killed and her friend Ruby. But anyway there were two ladies who came in here all the time and they had left here to go to Denison and they hadn't more than pulled out on the highway when this guy hit them and killed both of them, right down here," Melba added.  Calera Police Chief Don Hyde said, "You're getting some type of control on a roadway that has not control and with that it's a good thing.  But it's going to be a lot of changes for the traveling motorists and they're just going to have to be much more aware and hope that it will control the traffic and the flow of traffic better."  But it might take a little time to know for sure.  Crews still had to work out some kinks on Wednesday.  Still, it's progress towards solving what some say has been a deadly problem for years.  Thank the lord for the lights that we're gettin', absolutely," Melba concluded.