Church Steps Up to Provide Education about Alzheimer's 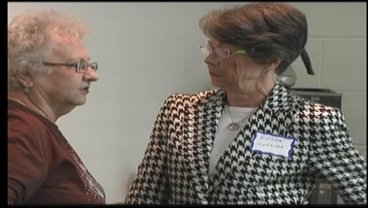 ARDMORE, OK--When your loved one suffers from a disease, like cancer, you can and probably will talk about the future or your fears. But Alzheimer's is completely different. As the disease progresses, you become more isolated from one another. It's much like losing your loved one, one piece at a time. Meredith Saldana has more on a newly formed support group in southern Oklahoma.

It all started when the Southwest Baptist Church in Ardmore realized they had several members of their congregation who were taking care of loved ones suffering from Alzheimer's.

They all had common struggles, but couldn't find local groups to help.

"I was shocked actually when I called around and tried to find someone and that's when the church decided something needed to be done," said Helen Collins, whose late husband suffered from Alzheimer's.

Tuesday, the church held the first of many meetings to come.

On the first Tuesday of each month at noon an educational meeting with guest speakers will be held and on the third Tuesday at 10 a.m. a traditional support group will meet at the church.

Helen Collins' husband passed away two weeks ago after battling Alzheimer's for 6 years.

She says a support group like this would've been a tremendous help to her family.

"I definitely do because you don't know what to expect. Everything that happens is a big surprise to everybody and just understanding why it's happening," Collins said.

Diane Wood with the Oklahoma Alzheimer's Association says the meetings will inform caregivers of the many challenges that their loved ones will likely face.

"Bathing is an issue. Sometimes people with the disease are very fearful of bathing. There's a fear of drowning. It's very important that you talk to the person with the disease," said Wood.

Church officials say anything shared in the meetings will be held in confidence.

As for Helen, although her husband has passed away, she still plans to attend the meetings.

"I'm going to come because there's still a lot of things I want to know. Plus, if I learn maybe I can talk to other people," she said.