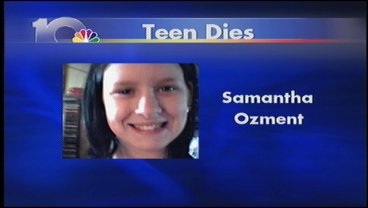 CARTER COUNTY, OK-- We told you Monday night, Carter County authorities were investigating what they called a possible homicide in the death of a 15-year-old Ardmore High School student. Now, new details on the investigation into what happened to Samantha Ozment. Meredith Saldana has been following this story and has the very latest.

The autopsy report shows the teen did not die of internal injuries, but authorities are not ruling out homicide.

Her family says they believe drugs and alcohol may have been involved, but toxicology reports are still pending.

Investigators hope to know more in the coming weeks.

We told you Monday, the family did not have the money for burial expenses to lay Samantha to rest.

In the hours after the story aired, more than $800 was donated to the fund and another person, has offered to donate a significant amount to help cover the costs.

If you'd like to help you can donate at the Citizens Bank and Trust in Ardmore.

The investigation into Samantha Ozment's death is ongoing.

We'll continue to bring you the very latest in this case.