The Community Mourns the Loss of a Fallen Denison Firefighter - KTEN.com - Texoma news, weather and sports

The Community Mourns the Loss of a Fallen Denison Firefighter 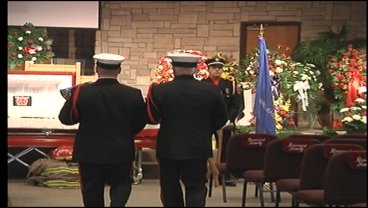 DENISON, TX -- The Brotherhood of Firefighters honored one of their own Tuesday.

Lt. Clinton Don Little of the Denison Fire Department was killed in a car accident on New Year's Eve.

There wasn't an empty seat or a dry eye in the house as friends, family and fellow firefighters packed into the Kemp Baptist Church in Kemp, OK to remember their beloved "C. D.", "Really admired C. D. He's a good friend and a good mentor. He helped me a lot with my early years of being a fireman and I really do appreciate him and he's going to be missed," said Charles Latimer, an Allen firefighter who was mentored by Little.

Lt. Little was a firefighter for nearly two decades. He spent most of his career at the Denison Fire Department. "Clinton Don lived to provide services to the citizens," said Chief Gordan Weger at the ceremony.

But, the 49-year-old's life was cut short on New Years' Eve. He died in a car accident. "He's going to be totally missed. He's going to be missed very much," said Nondas Bullard of the Sisters of the Fireman League for the Denison Fire Department.

C.D. is described as a man's man who loved hunting, riding horses and of course fighting fires, but he was also a mentor and a shoulder to lean on. "He was friend to all the firemen, but more he was a mentor to most of the firemen," said Chief Weger.