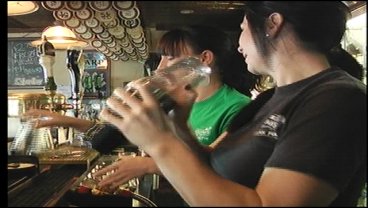 TEXOMA--Bars are getting ready to host some of the biggest parties in town, but they also remind celebrators to be safe. Establishments will be ready to pass the champagne, but they're also ready to call cabs in case a customer has had too much.

Texoma bars are ready for celebrators who plan on ending 2010 with a bang.

"It's going to be a fantastic time," Tabatha Newell said, TBones Bar & Grill bartender and server. "There's going to be lots of people here. Good music, beer and lots of fun with people."

That's the plan for several establishments in Grayson County. Cellarman's American Pub in Sherman plans on passing out the sparking bubbly before the ball drops.

Something to remember about bars in Sherman--they must close by Friday at midnight.

"And we have to have all the drinks out by 12:15 AM and so we would stay open if we could, but it's Sherman policy so you can't break the rules," Murray said.

Denison bars won't shut their doors until 2:00 am. TBones Bar and Grill anticipates a large crowd. They'll be hosting two bands on the holiday--Spur 503 and the Dustin Perkins Band.

"Great show full band--we got lights," Dustin Perkins said. "It's all kinds of specials going on here now. I think there's champagne for free and party favors and I think they're even going to have a little breakfast bar and stuff later. It's the best gig in town I can tell you that."

Other than getting friends home safely, there are other perks to being the designated driver. TBones will be serving soft drinks to sober drivers for free.

"Last year they said it was pretty busy I anticipate it being really busy tonight," Newell said.

Whether your sparking bubbly is a soda or a glass of champagne, bar owners and managers remind celebrators to have a safe holiday.

As usual, there is no cover charge at Cellarman's. TBones will be charging $20 dollars per person and $30 per couple on New Years Eve until 1:00 am.