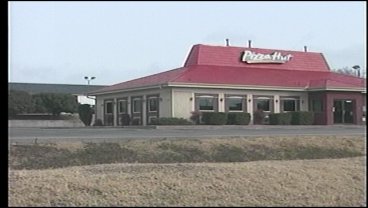 ARDMORE, OK--Ardmore police continue to investigate a second robbery of the week.

This time the Pizza Hut on North Commerce Street was robbed just days after someone robbed the First National Bank.

It was a scary situation Wednesday night for two Pizza Hut employees.

Police say a man approached the two women in the parking lot and demanded their money.

Ardmore Police tell us the man was armed with a knife when he robbed the women.

He then took off on foot southbound with the money in hand.

Because the robbery took place outside of the business, police don't have surveillance to help them solve this crime.

However, they did find evidence at the scene that we are told could be crucial to the investigations.

"Patrol officers that responded to the armed robbery later located the suspects ski mask that he was wearing during the robbery as well as they've located footprints that we believe are going to be from the suspect. Hopefully in time we'll be able to identify the suspect with the evidence they gathered," said Chad Anthony with the Ardmore Police Department.

No one was injured in the robbery.

The police do not believe this crime is in any way related to Tuesday's bank robbery.

Anyone with information on either of the crimes is asked to contact the Ardmore Police Department.