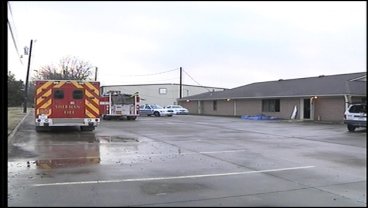 SHERMAN, TX -- A fire is reported at a Sherman funeral home. The fire marshal suspects arson. Deeda Payton spoke to the owner of Angelic Mortuary about the incident.

Police say a sledgehammer was thrown through the window of the chapel and some type of accelerate may have been used to set fire, but fortunately the fire did not spread.

A fire was reported at the Angelic Mortuary in the 1300 block of Teague Drive just before eight o'clock Thursday morning.

The owner, Terry White, says when he walked into work this morning he smelled smoke and when he saw the shattered window and sledgehammer on the floor, he called the fire and police department.

When firefighters arrived the fire was smoldering near the window frame. "It was heartbreaking and disturbing, not a pleasant way to start a year and end a year, so a little devastated," said White.

White says his is making temporary repairs to get through the holiday weekend. In the meantime, the fire remains under investigation.

Police say a separate fire at a nearby dumpster was reported around ten o'clock Wednesday night and they believe the two could be related.