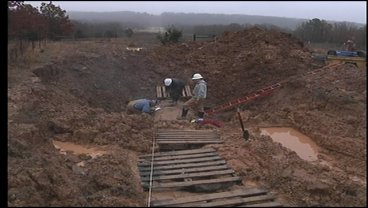 The repairs started at sun-up Wednesday morning.  "We just had to shut down the pipeline.  We had to shut down the source of water that goes to our customers," said McGee Creek Authority Superintendent Glen Russell.  One of those customers was Jeri Summey who first became aware of the problem late Tuesday night.  Summey said, "A girlfriend called last night about six o'clock or so that she had talked to somebody who said if we needed water that we better draw it while we could."  The break happened in the 72-inch line that runs from McGee Creek Lake to Atoka Lake.  "We came up here and discovered water coming up at a pretty good pace, about 2000 gallons a minute coming out," said Russell.  One of the biggest challenges for workers as they try and repair this leak is that they've got to get to it.  But the pipe is all the way down there, some 6 or 7 feet below ground.  Russell said, "We excavated the hole, dug it up, checked it out, cleaned it up and now we're welding on it."  And that welding turned out to be the fix crews needed.  As for what caused the break in the first place?  "I personally feel like it was probably a little seismic activity, a little earth shift.  There's very few other things that could have caused a break like this," concluded Russell.  Very few people, if any, were actually without water during the break because the city and rural water district were both able to run on reserve water.