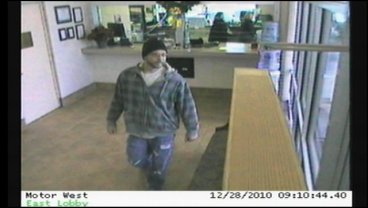 ARDMORE, OK--We have more details on a bank robbery out of Ardmore on Tuesday morning.

Meredith Saldana was on the scene and has more on this story.

There's a neighborhood directly behind the First National Bank and residents there tell us they're nervous about the situation since the robber is still on the run.

It was just a normal Tuesday morning for the residents near First National Bank on Broadway Street until a commotion broke the silence.

"Cops were swirling around in my alley looking for the guy," said Shannon Hamilton.

The guy was a robber who police say walked into the bank and handed a note to the teller, took the money and then took off on foot.

"And [he] ran out of the bank going southbound on N street southwest," said Ardmore Officer Chad Anthony.

He was running towards the neighborhood behind the bank.

Neighbors tell us they weren't sure what was going on, but immediately went inside their homes and locked the doors.

Some said they remained concerned because the man was still on the run.

A surveillance photo of the man police are looking for shows a white male in his 30's and about six feet tall with a thin build.

Police say he was driving a red Dodge pickup truck that he parked on a street near the bank.

Resident Shannon Hamilton says he saw the man and the truck in his neighborhood.

"I started to realize if the guy who they were looking for got in a red truck [that] fits the description," Hamilton said.

Corporal Chad Anthony with the Ardmore Police Department says it's citizen tips like Shannon's that could help them solve this crime.

"The witness over there in the neighborhood said he seen a guy get into a red Dodge pickup and that very well could've been the suspect and, because of an alert and good citizen, maybe that will be the thing that catches the suspect," said Anthony.

Anyone with information regarding the robbery should contact the FBI at (405) 290-7770.

You may remain anonymous.

The Oklahoma Banker's Association is offering up to $2,000 for information leading to the identification, arrest or conviction of anyone robbing a member bank.