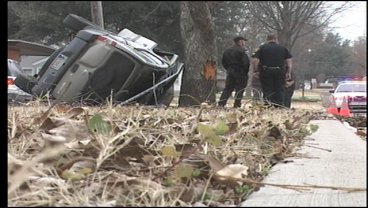 It happened around 3:45 p.m. in the 1500 block of third avenue southwest in a residential neighborhood.

Witnesses say they heard a loud boom and ran outside their homes to see what happened.

They found a mangled vehicle up against a tree.

The driver was taken to a nearby hospital with unknown injuries.

Police say they believe the driver may have been under the influence of drugs.