Sales Tax Revenue for Ardmore on the Rise 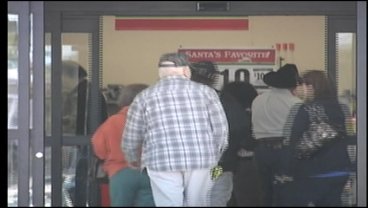 ARDMORE,OK--The Ardmore sales tax numbers are in for the month of November, and great news for the city, sales tax revenue is on the rise.

Meredith Saldana has more on what this means for the city.

Last year at this time the numbers were down.

No doubt it was a sign of the times but this year it seems people are once again spending their money locally.

So far, sales tax revenue has only slightly increased from last year, but, in a down economy, the Ardmore Development Authority says any increase is a good sign.

"It's more of helping industry, sustaining industry, and to help grow industry from a standpoint of, you know, with the people working, they're going to have money to spend and its bringing outside dollars coming in which increases the economic pie of Ardmore," said Brian Thorstenberg with the Ardmore Development Authority.

The city has also issued more building permits this year--a sign more construction is taking place across the city.

Along with low unemployment, Thorstenberg says these factors have protected Ardmore from the worst of the recession.