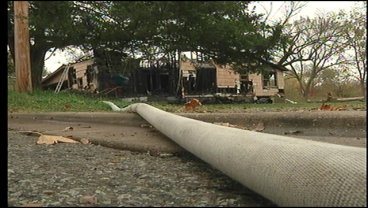 DURANT, OK--A Durant couple is without a home after a mysterious fire destroyed their house.

It's not something many would expect to wake up to. The home across the street---in flames. Officials say that they don't think anyone was hurt, but the home is a total loss.

Gary Wagner woke up at 4:30 in the morning to a police officer knocking at his door, and the house across the street on fire.

"Pretty intense. Pretty intense," Gary Wagner said, neighbor. "Flames just...it looked like it was out of control for a long time. I guess it took them a couple of hours to get it under control."

A house on the 300 block of NE 5th Avenue in Durant was engulfed in flames before 5:00 Friday morning. The officer asked Gary and his wife Jennifer to stay in their backyard for more than an hour while they worked to contain the fire.

"We have to make sure when we leave that everyone--that the house is empty--no one is still there so we do our best to make sure everything is taken care of when we leave," Roger Joines said, Deputy Chief of the Durant Fire Department.

It took Durant firefighters a couple of hours to put it out. Neighbors say the fire was huge.

The Durant Fire Marshal is still investigating the cause. The house is a total loss. No injuries have been reported.

"I guess it's just kind of amazing--you know--you don't normally think it's going to happen right there in your neighborhood, but I guess it does, you know," Wagner said.

Wagner is glad that no one was hurt and relieved that his home--and no one else's--was lost to the fire.

The Durant Fire Marshal said she doesn't think the residents, who are renters, were at home at the time.
The cause is still under investigation.