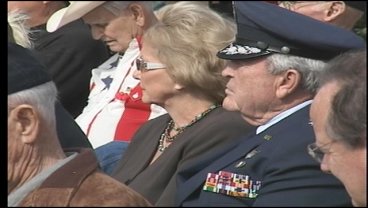 ARDMORE, OK-- We remember soldiers and also their families this Veterans Day. In Ardmore, we met a mother of fallen solider who wants Veterans Day to be a celebration. Meredith Saldana has more.

The Veterans Day celebration in Ardmore is always a big to do, but Thursday morning, more than 600 people gathered to honor our local veterans.

He was killed in Iraq on his way to Baghdad.

His mom was honored at the service as a Gold Star Mom, but she says it's important to remember what Veterans Day is all about.

"People often mistake Veterans Day for Memorial Day," says Phillips. "Veterans Day is a day to celebrate and be grateful and thank these men and women who have served our country, kept us safe, given us all the freedoms that we have so we can get together and do things like this and speak out."

Her son Micheal always attended the annual celebration in Ardmore.

She says it was hard not to think of him during Thursday's ceremony.

The Ardmore High School band was there as well as the entire Plainview High School.

Something the key speaker, Paul Merchant with the National Guard says is very important to veterans.

The ceremony was touching and emotional, "So many veterans here today how can you not be grateful," says Phillips. "Less than 1% of our population serve in the military, these are a special breed of people and we just need to really celebrate who they are and be thankful to them."