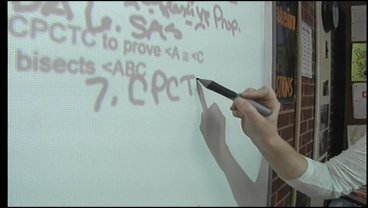 BRYAN COUNTY, OK -- Textbooks could soon become a thing of the past. Wednesday, some Oklahoma lawmakers gathered in the state capitol to look at the benefits of putting electronic reading devices in the classroom instead. As Deeda Payton found out, technology upgrades are happening across Texoma despite budget shortfalls in the state.

A smart board is basically a digital chalkboard, and the Silo School District in Bryan County was able to purchase several for their classrooms thanks to a technology grant. "We're very pleased and proud about that," said Silo Superintendent, Dr. Bill Caruthers.

Texoma educators say technology upgrades like computers and other digital media are vital to a student's education these days. "In my career, I've seen the learning styles change many times and these students have no memory of the time before computers and cell phones so they learn in a totally different way," said Durant High School Teacher, Phyllis Rustin.

Students couldn't agree more. "A book versus an iPad kids naturally want to go towards the iPad more than the book," said eighth grader, Summer Simeroth. That's why these laptops, called "Netbooks," are being implemented into classrooms at Durant ISD. "Well it's important for their future obviously in the workplace. The day-to-day routine is computer-oriented. Colleges now are computer-oriented and the things that we do everyday to make it a priority for our kids to be successful in school, out of school, in the workplace," said Dr. Jason Simeroth, Superintendent of Durant ISD.

Next year, more than 850 Durant High School students will have their own Netbooks. The computers will be paid for with a seven million dollar bond passed by voters.

"I think eventually we'll have about 1400 students with a laptop in their possession 24/7, use it at school, use it at home, and it was really a blessing to our district to be able to do that to move toward the future of education," said Dr. Simeroth.

It's technology that is helping students learn and it's building a bridge across the digital divide.

Wednesday in Oklahoma City, lawmakers reiterated that textbooks are heavy, expensive and often outdated. Educators I spoke to say they do believe digital media will one day replace textbooks.