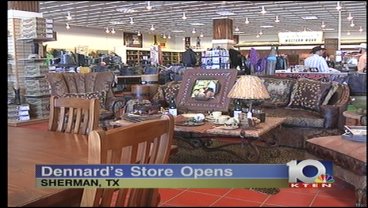 SHERMAN, TX -- If you've driven by the Sherman Town Center, you might have noticed a new store where Pier One Imports used to be located. Well, it's not a new store. It's Dennard's Western Wear, a locally-owned retailer that's been in Sherman for 13 years. Deeda Payton explains why the store re-located.

A store manager says you just can't beat the visibility that being in the Sherman Town Center offers. The store left Midway Mall to make the move. Tuesday Dennards had its grand re-opening.

Just weeks ago, Pier One was holding their going out of business sale. Tuesday morning, the western wear store, Dennard's, re-opened in that same location.

Store Manager, Shane Avery, says it was a quick transition for the store. "We heard that they were moving and we called, secured the location. All we had to do was build dressing rooms, a few shelving and that was it."