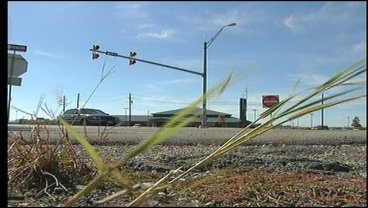 SHERMAN, TX--Those who drive on East Highway 82 will be noticing some changes in the next year. East of Sherman, Spur 1417 will be a brand new bridge over 82 and will no longer intersect the highway. TXDOT hopes fixing the intersection will prevent future accidents.

One has yellow flashing lights, the other red ones and a stop sign. The warnings--though--haven't prevented accidents. East Highway 82 and Spur 1417 will be undergoing some big changes in the next year.

"We look to see what we can do to reduce those number of accidents and find some different solutions," David Selman, TXDOT area engineer. "In this particular case, we're actually able to put in an overpass."

The embankment on Spur 1417 is about 20 feet taller than that of East Highway 82. That's going to allow construction workers to build a 1417 bridge. According to the Texas Department of transportation, it will hopefully prevent future accidents.

"82 will go underneath Spur 1417 and the reason for that is to reduce the number of conflicts. We had some accidents in that area," Selman said.

The Department of Transportation is using safety bond money to fund the $3.6 million project. The contractor has less than a year to get the bridge done.

"But it's the folks maybe wanting to go south to 56 or if they're going north on 1417 and they want to go back into town, they'll have to go to the crossovers and turn back around," Selman said.

Fixing the dangerous intersection will hopefully prevent another accident.

When work begins, only one lane of traffic will be closed. Construction will only happen during daylight hours. The project is expected to be completed by September 2011.