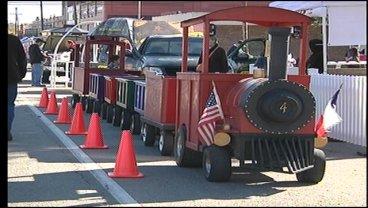 WHITEWRIGHT, TX--There were so many visitors in downtown Whitewright Saturday, that the streets had to be shut down. They were there for the town's annual fall festival.

It's was the 8th Grand Street Festival for the town. In addition to vendors and local artists, there were also several family activities including rock climbing and pony rides. Musical performers, including an elvis impersonator, were also there.

"Elvis was my hero growing up--and my grandma would tell you that when Larry was a little bitty boy, he'd stand by the record player and dance, and use to sing along with Elvis, but we do a lot of just rock and roll songs," Larry Schone said, performer.

Downtown stores were also open for those who needed to get an early start on their holiday shopping. There was also a wine tasting, a firefighter chili cook-off, and a car show.