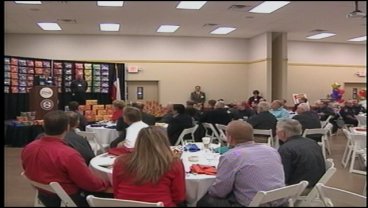 DENISON, TX -- It's hard to believe it's been five years since Ruiz Foods started up a processing plant in Denison, but, Friday the California-based company celebrated it's anniversary. Deeda Payton took a tour of the Mexican food processing plant and has more.

Ruiz Foods is a family-run company that has been producing frozen Mexican food for nearly fifty years. It's also one of the largest employers in Denison, Texas. "The arrival of Ruiz Foods has just been such a blessing for our community and to have them here for the last five years has been a great boost to our economy," said Denison Development Alliance Chairman, Harry Kirschman.

The Denison Development Alliance helped bring Ruiz Foods to Texoma back in 2005. The company set up shop in the old Pillsbury Plant making about a $50 million investment in Denison. Nearly 700 employees produce about 400,000 pounds of food everyday just from the Denison plant alone.

Ruiz Foods President and CEO, Bryce Ruiz, says they couldn't be happier with the workforce and progress the company has made in Denison. "Our turnover is the lowest it's ever been as far as this facility and like 61 people are celebrating five years so that's a success story."

Ruiz says amazingly they haven't been held back by the troubled economy, but then again, he says, people have to eat. "We're open for business and we continue to hire and look for great people."