Fire Leaves More Than a Dozen Families Without a Home - KTEN.com - Texoma news, weather and sports

Fire Leaves More Than a Dozen Families Without a Home 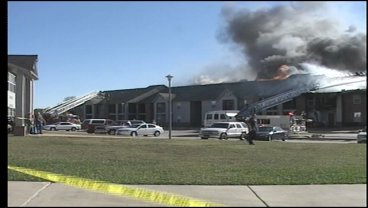 ARDMORE, OK-- It was breaking news at 5 and 6, an apartment fire in Ardmore that  left more than a dozen families without a place to call home. Meredith Saldana was on the scene, she has more on this story.

"We noticed the smoke first and then I looked up and I seen some flames, it looked like a barbeque pit that the flames were up high on it," says apartment resident Nancy Davis.

Davis adds, "We went and called 911 and then we went and got Chris the manager and it just started going really fast in this first apartment."

Neighbors tell us it was a scary situation.

They said they smelled smoke and then flames were coming out of the windows and doors within a matter of minutes.

Charlotte Adams became trapped in her apartment during the fire, "I went into the bathroom and then I seen a lot of smoke and then I thought I was gonna collapse. Then I opened up the window and said I can't breathe. I said, I need out. Oh my god."

Moments later, firefighters used the ladder to reach Charlotte's window and quickly brought her to safety.

She says had they not been there to help her, she would have been forced to jump out the window.

One of the neighbors actually told us he went into an apartment on fire to help save his neighbor.

"She was in there on the bed calling 911, I said, 'Kathy, you get out of here'. I grabbed two fire extinguishers and I opened up that balcony door and then flames just- and I said oh boy," says resident Charles Bryson. "I started shooting it, it stopped for a minute then all at once it just, it went up and that's all she wrote. She started burning and I knew then I didn't have no chance of putting it out with fire extinguishers."

As fire crews were working to put out the flames, residents watched in disbelief wondering if there was anything left to salvage.

"I lost everything and I can't replace it," says Charlotte Davis.

Meanwhile, kids were being dropped off by school busses.

They were devastated to see their homes in flames and many found out their pets didn't make it.

Fire Marshall Clyde Ellis tells us they do know the fire started on a balcony, but the cause is still under investigation.